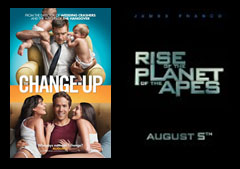 The Plot: During a drunken night of partying a married father of two (Bateman) and his single playboy best friend (Reynolds) make a wish to trade lives only to wake up the next morning and realize the wish was granted.

The Final Word: We’ve of course seen this scenario before where friends/family switch lives, but this is updated take on the classic device. Reynolds and Bateman clearly aren’t going for anything sophisticated here and that’s why it may work. In a summer where raunchy comedies rule the box office, “Change-Up” should find itself right at home.

The Plot: A scientist’s (Franco) breakthrough and his company’s greed leads to Earth being overrun by smarter than human apes in this prequel to the iconic “Planet of the Apes.”

The Final Word: After a failed reboot in 2001, the “Apes” franchise has languished for nearly a decade. Now FOX is trying to give the once profitable movie series another shot in the arm by creating a prequel. It’s actually a clever concept as everyone is familiar with the man waking up on a planet run by apes story, but how the planet was overrun by the creatures was never explained in this much detail. Although following Tim Burton’s widely panned version of the movie, the question is will audiences be willing to give it another chance?

Email ThisBlogThis!Share to TwitterShare to FacebookShare to Pinterest
Labels: Rise of the Planet of the Apes, The Change-Up 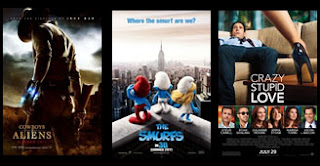 The Plot: A drifter (Craig) awakens in a small Western town with no memory of how he got there and soon finds himself teaming with the local sheriff (Ford) to battle a invading group of aliens from outer space.

The Final Word: Jon Favreau has taken an ageless genre and put a new spin on it, but best of all it’s in 2D! The movie already has enough gimmicks; it doesn’t need an added dimension as well. Craig and Ford should make for a fun on-screen paring and Olivia Wilde is one of the hottest rising young actresses. This is the role the “House” actress took that set up her (well written) temporary exit from the series.

The Plot: Chased out of their own world by the evil Gargamel (Azaria), the Smurfs find themselves in a place they are unfamiliar with; Earth! Now the little blue cartoon characters must rely on the help of a married New York City couple (Harris, Mays) to find their way home.

The Final Word: Well it was only a matter of time before the friendly little blue animated kid icons got the big screen treatment and audiences are looking forward to their return. With a mix of CGI and live action, the Smurfs return to the world of pop culture sporting a strong voice ensemble and a perfectly casted Hank Azaria as the evil Gargamel. Audiences should feel nostalgic enough to give this film version a go, but some older viewers may be turned off by some of the lower brow humor shown off the trailer. Regardless, Columbia is expecting their blue friends to translate into a lot of green.

The Plot: After learning that his wife (Moore) has been cheating on him, a married man (Carrell) teams up with a cocky playboy (Gosling) to get back in the dating game.

The Final Word: Steve Carell’s “Office” exit has opened the doors to more movie opportunities for the talented and affable actor. Here, he teams with a who’s who of Hollywood including the very in demand Emma Stone, who became a hot commodity after last year’s “Easy A.” All of the leads have proven they can hold their own, but this a big chance for Gosling, who has yet to be showcase his comedic side. Paired with Carell, they’ll create a new type of “odd couple” which audiences could really enjoy watching. 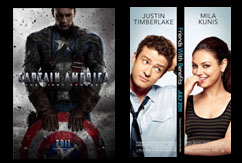 The Plot: A military experiment transforms the weak and scrawny Steve Rogers into a super-solider known as Captain America.

The Final Word: Comic book fans have had a busy summer at the box office so far with the release of “Thor,” and “X-Men: First Class.” Now comes the final major super hero flick of the season and along with it the last Marvel film before next summer’s “The Avengers.” Starring an eclectic mix of Hollywood stars, “Captain America” will look to continue the momentum that has carried Paramount’s slate the last few years. Audiences have stayed with the brand so far and they aren’t likely to stray now.

The Plot: Two friends (Timberlake, Kunis) attempt to have a relationship without any of the emotional responsibilities, but soon find that isn’t as easy as they thought.

The Final Word: Stop me if you’ve heard this one before. Paramount released the similarly themed “No Strings Attached” back in January to put some distance between the two films. Although surprisingly in this market, there may be room for both comedies as at this point the summer, many audiences are tired of all the action and 3D explosions and looking for something lighter. Another positive aspect going for the movie is its director Will Gluck, who hit gold last September with the Emma Stone led romantic comedy “Easy A.” Audiences really responded both Stone and Gluck, which could help influence audiences to see “Benefits.” 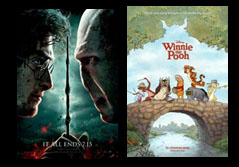 The Plot: As Harry Potter’s (Radcliffe) final battle with the evil Lord Voldermort (Finnes) looms, it’s the boy wizard’s friends that could pay the ultimate price in the final movie in the iconic book series.

The Final Word: There is nothing I can write hear that you probably don’t already know. This is the last “Harry Potter” movie and it comes to Cineplexes almost a full decade after the original. Fans of the boy wizard are going to see this no matter what, meaning it could be in 2D, 3D or in good old fashioned black-and-white and it wouldn’t make a difference to the bottom line; the movie has insane drawing power.

The Plot: Return to the Hundred Acre Woods with Winnie The Pooh and all of his friends as they go on a journey to save their friend Christopher Robin.

The Final Word: Winnie The Pooh is arguably one of the most cherished children’s characters of all time and many have missed the presence of the pudgy little bear in the mainstream media. Disney has now taken five of the classic Pooh stories from creator A.A. Milne and crafted them into a new motion picture. Although Disney also has to know that going up again “Harry Potter” is a no-win situation and to place it there must mean they don’t expect any record breaking openings, but they do get to introduce Pooh Bear and all his Hundred Acre Woods friends to a brand new generation, which may be just as profitable.

Previewed next week: Captain America: The First Avenger & Friends With Benefits
Posted by - at 8:42 AM 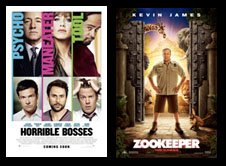 The Plot: Three mistreated employees team up to get revenge on their cruel and despicable bosses, but soon learn best laid plans aren’t as easily carried out.

The Final Word: This could easily be the next “There’s Something About Mary,” as it has a plot people can relate to and a cast people love. You also have to give credit to New Line for assembling this group of actors and letting them be as over the top as the script allows. Take the talented trio of Bateman, Day and Sudeikis out of the equations for a second and you can truly realize just stacked this movie is with talent. In fact many are excited just to have another chance to see Spacey inhabit the role of one the title “horrible bosses.” Many fans remember him turn as a sadistic studio executive in “Swimming With Sharks,” and are excited to see him bring a similarly slimy character to life. Having Aniston and Farrell on board to round out the awful overseers only makes the film’s stock rise.

The Plot: In order to get the girl of his dreams, a zookeeper (James) decides he must change careers, but when his animals find out his plan, they reveal to him that they can talk in an attempt to get him to stay.

The Final Word: In all honestly “Zookeeper” is literally an updated version of Dr. Dolittle, which a few tweaks. Although that shouldn’t matter as star Kevin James proved what a box office force he was when “Paul Blart: Mall Cop” put on a box office clinic. Throw in a bunch of cute and celebrity-voiced animals and James should be able to laugh his way to the bank once again.

Previewed next week: Harry Potter & The Deathly Hallows: Part 2 & Winnie The Pooh
Posted by - at 7:51 PM 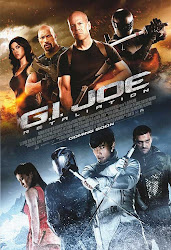